The Grandmaster Experiment by Carlin Flora

Judit, Susan and Sophia grew up in a veritable chess cocoon spun by their father, Laszlo, the intellectual equivalent of Serena and Venus Williams’ autocratic tennis dad, Richard. Some people consider Laszlo’s role in shaping his daughters’ careers to be absolute; others call it a happy coincidence. Raw talent and a childhood with all the advantages account for success in many fields, and chess is no exception. But the paths Susan, Judit and Sophia took as adults illuminate many intangibles in the achievement equation. An aggressive streak, birth order, a chance encounter that leads to a marriage on the other side of the world—these factors and changes of fortune are just as critical in determining whether a person rises to the top of his or her game.

Forty years ago, Laszlo Polgar, a Hungarian psychologist, conducted an epistolary courtship with a Ukrainian foreign language teacher named Klara. His letters to her weren’t filled with reflections on her cherubic beauty or vows of eternal love. Instead, they detailed a pedagogical experiment he was bent on carrying out with his future progeny. After studying the biographies of hundreds of great intellectuals, he had identified a common theme—early and intensive specialization in a particular subject. Laszlo thought the public school system could be relied upon to produce mediocre minds. In contrast, he believed he could turn any healthy child into a prodigy. He had already published a book on the subject, Bring Up Genius!, and he needed a wife willing to jump on board.

Laszlo’s grandiose plan impressed Klara, and the two were soon married. In 1973, when she was barely 4 years old, Susan, their rather hyperactive firstborn, found a chess set while rummaging through a cabinet. Klara, who didn’t know a single rule of the ancient game, was delighted to find Susan quietly absorbed in the strange figurines and promised that Laszlo would teach her the game that evening.

Chess, the Polgars decided, was the perfect activity for their protogenius: It was an art, a science, and like competitive athletics, yielded objective results that could be measured over time. Never mind that less than 1 percent of top chess players were women. If innate talent was irrelevant to Laszlo’s theory, so, then, was a child’s gender. “My father is a visionary,” Susan says. “He always thinks big, and he thinks people can do a lot more than they actually do.”

This is an excerpt from the original:

I believe this excerpt is consistent with Fair Use provisions of copyright law, as I will be referring to the image "for purposes such as criticism" in a later blog post. 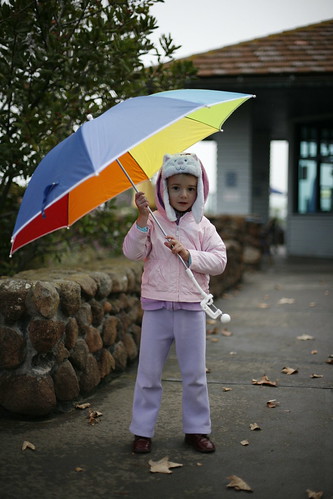 Kids with umbrellas are adorable