I love Weezer’s Pork and Beans video. Via boffo.

meredith was in town last weekend, so we went to the 8th Annual Fire Arts Festival in Oakland. (Note to self: when meeting a woman for the first time, don’t park in the empty underground parking garage.)

We arrived just as the gates opened, and the place was soon packed. The announcer said that over 2000 people were there that night.

My favorite exhibit was the Fire Vortex. Two guys dressed in silver flame retardant suits stood across from each other. Each held a long metal wand, from which they could shoot an aerosolized mist of fuel. Between them was a large ducted fan, which created a strong vortex of air. They would fire fuel from the wands into the vortex, and light the mist on fire, creating a tornado of fire.

Quite lovely to see.

My second favorite? The Omega Recoil, which consisted of a man dressed in a full body Faraday cage. He writhed underneath a giant inverted Tesla coil, which shot lighting bolts into his suit.

Meredith and I climbed up through the center of the Steampunk Treehouse. The Festival was held in view of the BART, and every time one passed, you could see the passengers looking out the window to watch the exhibits. It made quite a lovely tableau, with the crowds writhing around the burning fire exhibits, as a lighted train filled with passengers passed slowly along on the risers above. 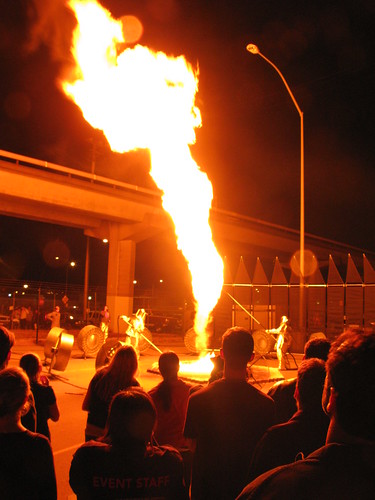